Loading data into a Data Vault Model is easy. But how complex is it to extract the data from a Data Vault into a dimensional Data Mart? A Point in Time (PIT) table helps to load Dimensions from a Hub with multiple Satellites.

In the meantime, I realized that loading dimensions is indeed not trivial, but much simpler than I expected. The magic behind it is called Point in Time (PIT) Table.

The complexity of an ETL process to load a dimension table depends on the type of Slowly Changing Dimension and on the number of Data Vault tables that are used to derive the information of the dimension. Let’s start with the simple cases:

But what happens if we want to load an SCD2 dimension from a Hub with multiple Satellites, or from more than one Hub, each of them containing several Satellites? Here we will have more complex cases:

Let’s have a detailed look at the case with one Hub with multiple Satellites. In the example below, we see the timeline for a Hub with four Satellites. Each Satellite contains 2 to 3 versions for a particular business key. The combination to be loaded into the SCD2 dimension table will contain 7 different versions.

To calculate the validity range for each version, a Point in Time Table (PIT table) is created in the Data Vault model. It contains all combinations of load dates and is used to derive all valid versions that have to be loaded into an SCD2 dimension table.

A PIT table is connected to a Hub or a Link and is therefore a similar structure as a Satellite. But unlike a normal Satellite, it does not contain descriptive attributes, but the load dates/timestamps of all other Satellites of the same Hub or Link. Let’s explain this with an example: For a Hub H_CUSTOMER, there are four Satellites defined in the Data Vault model. Each of them contains its own history. The address of a customer can change several times, but usually not at the same data as an e-mail address or a phone number. Each of the Satellites may contain multiple versions of data for a particular customer, with different load dates. 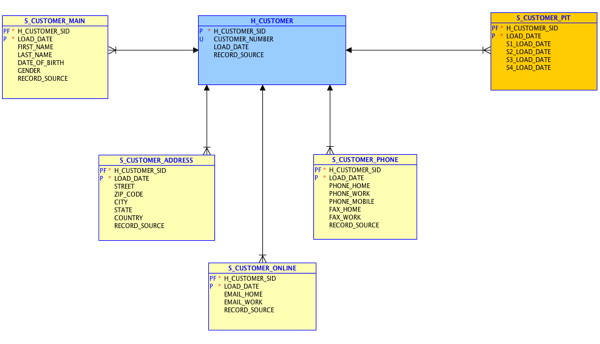 The PIT table contains all distinct load dates of all Satellites. For each load date, the newest load date of every Satellite is stored in an additional attribute. This helps to identify what version is valid on a particular date. In the following example, the valid versions for customer 2234 on 22 March 2015 are

There are two approaches to load the PIT table. One is to select the newest load date of each Satellite after each load. If at least one of them changed since the last load, a new version is inserted into the PIT table. This approach is similar to the incremental load of Satellites.

The other approach is to reload the PIT table from scratch after each load. This sounds more complex than it is. The following SQL statements show how this can easily be implemented:

The subquery factoring clause LOAD_DATES selects all distinct load dates for each key (H_CUSTOMER_SID). With this information, a left outer join on each Satellite is performed. For each Satellite, the newest load date per key is calculated with an analytical function. This query was implemented on an Oracle 12c database, but can be used in any database system that supports ANSI SQL.

The attribute LOAD_END_DATE is optional, but is very convenient for getting the current versions, as we will see in the Current View of the next paragraph.

For each business entity (i.e. a Hub with all Satellites), we can generate two views:

The Current View reads the PIT table loaded before. It is joined with the Hub and all connected Satellites. An outer join is used for the Satellites because it may happen that not all Satellites contain data for any timestamp in the past. Outer joins are used for the Satellites to avoid that a customer is not selected because one of the Satellites is empty. Because we are interested in the current versions only, only the PIT rows with no LOAD_END_DATE are selected.

The History View looks almost the same as the Current View, except that all rows from the PIT table are selected, not only the current ones. Additionally, two columns VALID_FROM and VALID_TO are provided in the view. They can be used to retrieve all versions that are valid on a particular snapshot date. To make it easier to select the data, the end date of the last version (which is NULL) is replaced by the maximal date 31 December 9999.

Finally, we come back to our original question: How complex is it to load Dimensions from a Hub with multiple Satellites? With the PIT table and the History View Layer that we built before, most of the work is already done. To load the dimension tables, we can distinguish the following situations:

As we can see from these four different load scenarios, the History View is only required for an initial load of an SCD2 dimension. In all other situations, the Current View is sufficient to load the dimensions. But in a agile DWH environment, it should always be possible to rebuild Data Marts from scratch. So, it’s a good idea to have a History View for all Hubs and Satellites. With a PIT table, this can be built easily.

20 thoughts on “Loading Dimensions from a Data Vault Model”